“I think I have a secret, an important one. I can’t say what it is yet. I’m not trying to be coy; I don’t know it myself. But I have it inside me. And it’s something that demons and devils and gods and angels can’t know. I think they all want to end the world, and it doesn’t have to end.”

Start at the Main Page to see how this campaign is structured, or dive in and start reading the adventures. 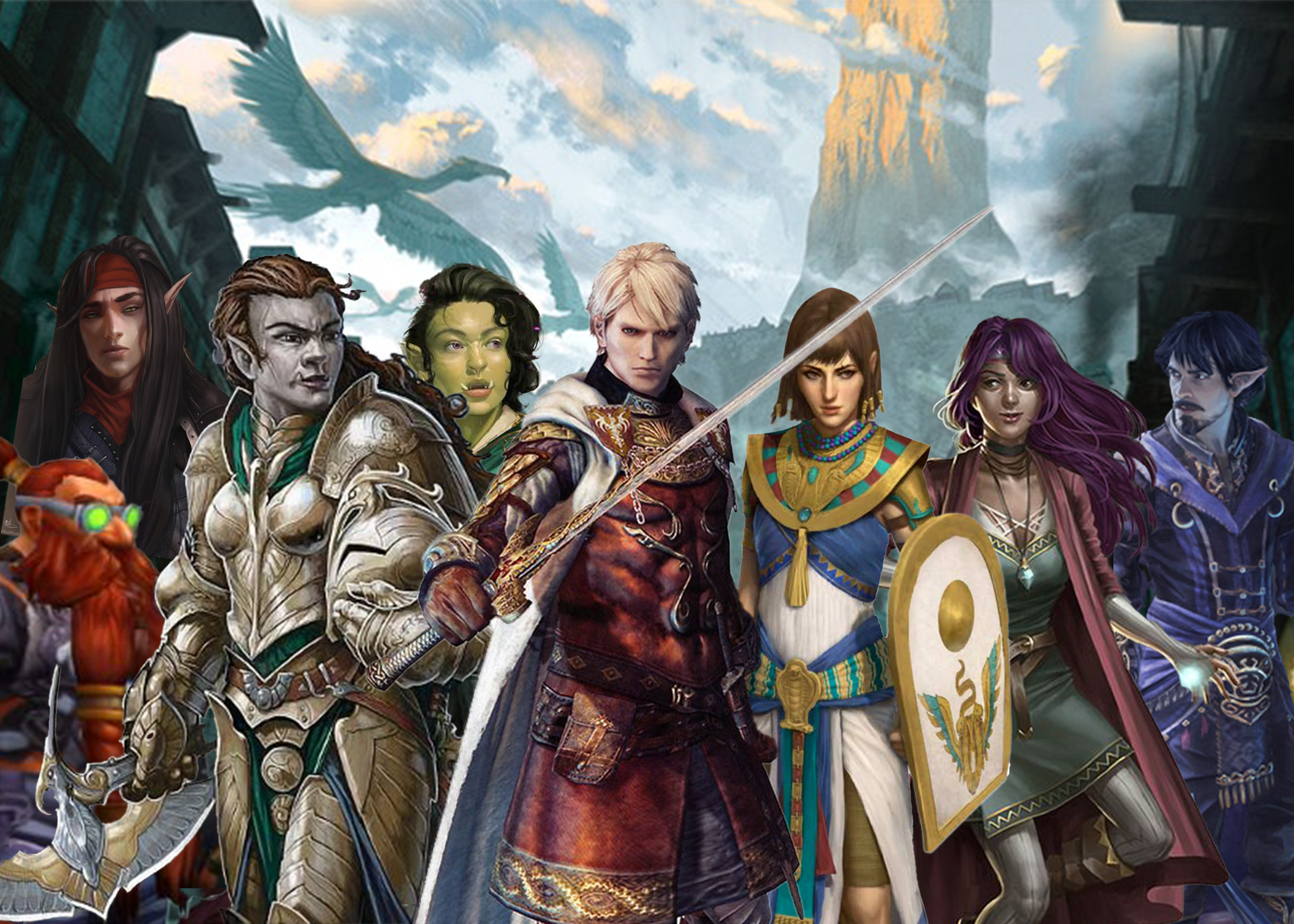 (I do not own any of this art – these are the result of description-based websearches. I’m happy to credit artists, to pay for the use of their work, or to take their art out of this picture if they ask. Links where I found the art at the bottom of the page.)

To understand Ptolus, download the free Ptolus Player’s Guide – that gives you the setting far better than I could describe it here. I am slowly building a wiki for more information about Ptolus (but moreso about this campaign), but I want to be sensitive to not copying much-if-any copyrighted material here. (You can purchase Ptolus here; it’s in my opinion one of the best sourcebooks for any roleplaying game ever made, and well worth the sixty bucks for the pdf if you’re interested either in worldbuilding in general or in GMing a high-powered medieval city campaign.)

My four players each play two characters, who are each involved in two of the four major plotlines of the campaign; hence four plotlines, each with four primary characters; for each plotline each player has one character; but as the characters all know one another, for major adventures or significant milestone events they may all be involved together… thus the “Four By Four” title.

The five of us generally play each Saturday night. Family – both adult kids and elderly parents – intervene some weekends; we game when everyone’s available.

GMs familiar with Ptolus may find my Index to be of interest, where I am keeping up a list of what I consider to be worthwhile “you could steal this” storylines, with notes on sources for some of the adventures. Most incomplete adventures won’t show up on the index since I’d like my players to be kept in a bit of suspense as to what’s published and what’s original.

I am deeply indebted to archonshiva’s Further Up The Spire, Orangutank’s Slaking the Gamecock, to Bryan’s City By The Spire and CSDavis’s TheSpire (both right here on obsidianportal), and of course Monte Cook for making their campaign journals public; I have been stealing plot ideas, city flavor, and NPCs extensively from each (which of course implies that my players are asked not to read them yet).

The events of the 2020-2022 Pandemic of course disrupted this game, but perhaps less than it disrupted most other forms of ordinary life. The five of us comprise two couples plus the adult child of one couple; we took to using Roll20 for gaming starting around session 12 and lasting until the end of May 2021, when we were all safely vaccinated. But there was a major, if subtle, impact on the style of storytelling: the game sessions run slower, there is less conversation and crosstalk and fewer spontaneous roleplay opportunities, and it is much harder, at least in Pathfinder/3.x, to spin up an extemporaneous or unplanned tactical scene – I can’t simply toss down some tiles or sketch a map using an erasable marker on a map grid. I need to find a map that works in order to have an encounter.

Which meant that the PCs spent levels 2 through 8 doing more dungeoncrawling and less city adventuring than I would have originally expected.

All of which is perfectly fine – and there will still be multiple dungeoncrawls happening as the campaign continues – but as we emerge from the pandemic I have realized there are a lot of stories I’d wanted to run that are geared toward 2nd-6th level characters, which can’t easily scale to the 8th/9th level parties the PCs composed by the time the quarantines were lifted. So there are some adventures with the Mouser Street Irregulars, the teen street gang rescued from a life of crime by the Shipman PCs, who will interweave with the rest of the storylines of Ptolus Four By Four, and which let me run some of the city-street-based adventures I otherwise would have lost the opportunity to run.

The twelve weeks or so from early September to early December have had very few sessions, as we had college football games to attend.

Links to the art above, “as far as I know” – hopefully the artist names I’ve found are accurate, and I’d appreciate knowing the others.

I'm sorry, but we no longer support this web browser. Please upgrade your browser or install Chrome or Firefox to enjoy the full functionality of this site.